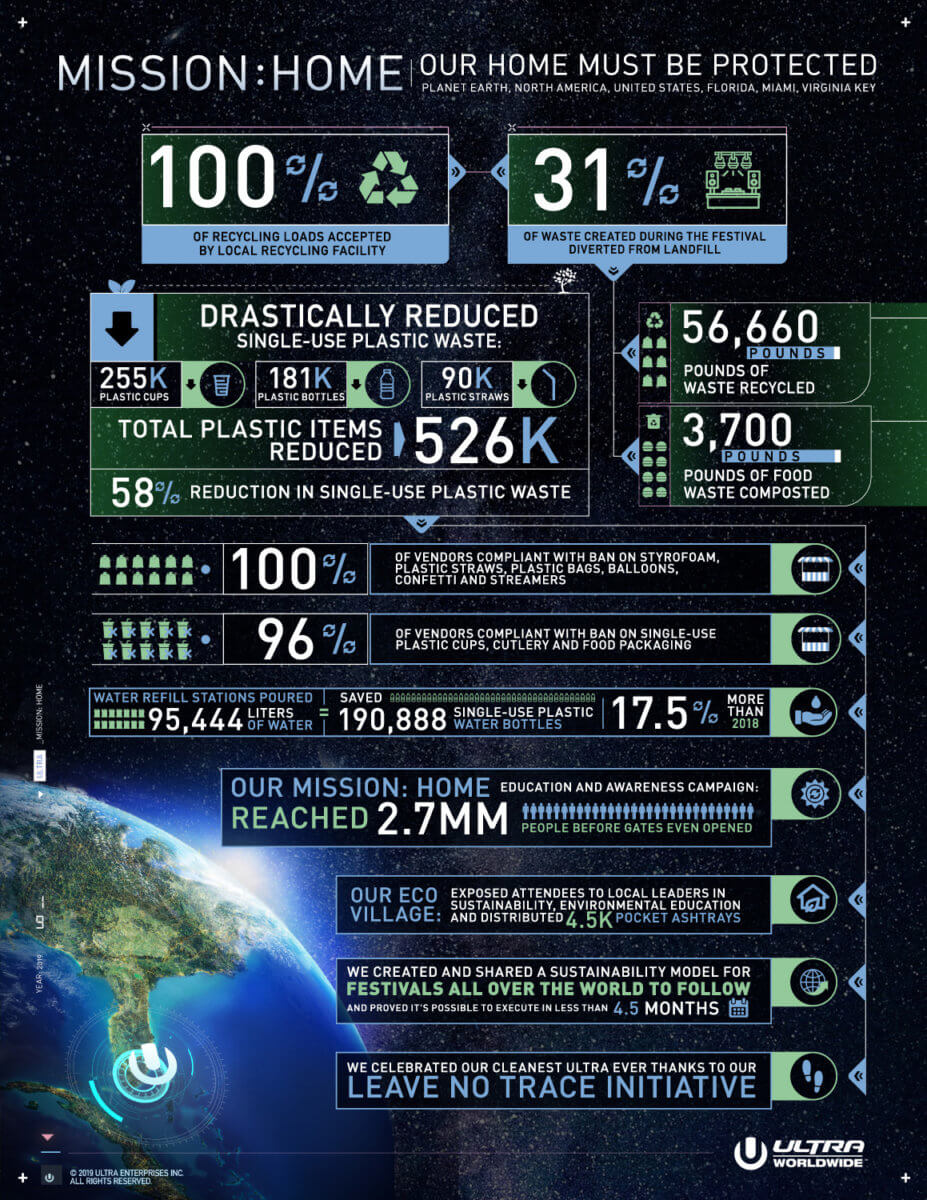 Miami, FL, (July 23, 2019) – When the ‘Mission: Home’ sustainability campaign launched earlier this year, it reached over 2.7 million fans across social media platforms before Ultra’s gates had even opened. Now, the festival is reaffirming its commitment to its far-reaching environmental efforts.

We are happy to announce that our Mission: Home sustainability initiatives including our Leave No Trace policy, single-use plastic reduction efforts and recycling program will continue in 2020 and beyond.”

The sustainability plan actioned unprecedented shifts in internal operations, while engaging vendors, crew, employees and attendees in working together to reduce environmental impact.

Now that the music has stopped and the stages are gone, Ultra has received an “A” on an unexpected report card compiled by local environmental organizations. “Ultra Music Festival sets the bar in festival greening” reads the report card headline on volunteercleanup.org. The 2019 sustainability initiatives included prohibiting beach access, increased water refill stations, a ban on polystyrene (Styrofoam), plastic straws and balloons, as well as the implementation of a “Leave No Trace” policy, and a recycling and composting program. Of the 19 initiatives that received an individual grade, 14 received a grade of A- or higher from three of Miami’s local environmental organizations. VolunteerCleanup.org, Surfrider Foundation Miami and Debris Free Oceans collaborated on the unbiased, third-party report card detailing Ultra’s achievements and key learnings.

After these initiatives had been established, Ultra went a step further, creating an internal Sustainability department and engaging a global environmental consulting firm to assist in creating its plan for protecting sensitive areas and wildlife. Ultra later banned confetti and streamers, as well as single-use plastic cups, bags, cutlery and food packaging. Collectively, these initiatives avoided the use of over 526,000 single-use plastic items, 100% of recycling loads were accepted by the local facility and 31% of the waste created during the event was diverted from landfill. In total, 60,360 pounds of waste were diverted through recycling and composting efforts, as detailed on the above infographic.

Before this year’s event, Ultra stated the mission of this campaign was “to preserve our home on Virginia Key, reduce our environmental impact and inspire our attendees to protect the planet.” The mission was heavily present at the festival this year, including messages motivating environmental protection and “Leave No Trace” instructions on signage as well as in bright lights flashing across the festival’s main stage screens. 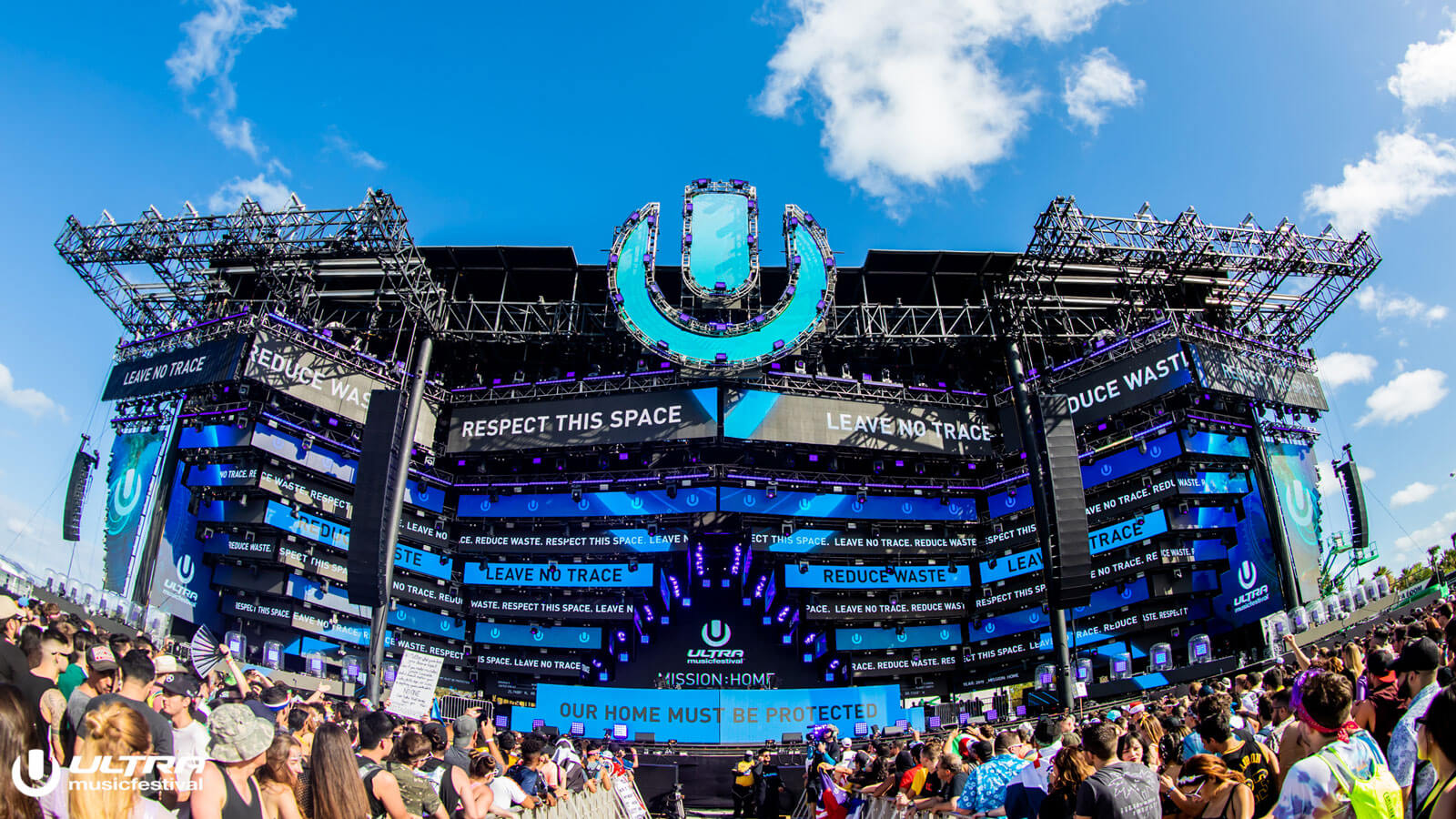 The environmental organizations noted that attendees followed suit, “We were thrilled that the venue appeared exceptionally clean. There were enough waste stations, appropriate messaging, and volunteer staff to establish the social expectations, which the attendees followed.” Virginia Key Beach Park Trust Special Events Liaison, Michelle Swaby-Smith, agreed, “The sustainability plan ‘Mission Home’ was like no other. We were astonished at how clean the park was… even the attendees did their part,” she wrote in an email to City of Miami Commissioners.

Environmental education content available throughout the event reached roughly 55,000 attendees per day for three days. A video about the Leave No Trace initiative aired on Ultra’s YouTube channel, which garnered 30 million views over the course of the weekend. All of Ultra’s Mission: Home sustainability initiatives were shared online, creating a sustainability model for events all over the world to see.

Ultra certainly accomplished this year’s mission, which came to life in only 133 days after the 2019 venue announcement. Ultra’s hope was that as attendees returned home to more than 105 countries around the world, they remembered what they learned at the event. Now, the festival’s commitment to continuing these efforts at future events presents an even greater opportunity to continue impacting their young global following, influencing a movement towards a sustainable future.

VolunteerCleanup.org engages volunteers to cleanup their neighborhoods, shorelines, and waterways as a way to raise awareness about marine debris and encourage people to reduce their reliance on single-use plastics. Find or organize a cleanup on their official website and read Ultra’s Report Card.

Debris Free Oceans is a Miami-based organization that inspires local communities to responsibly manage the lifecycle of plastics and waste as part of a global initiative to eradicate marine debris from our beaches, reefs and oceans. Learn more on their official website.

The Surfrider Foundation is a nonprofit grassroots organization dedicated to the protection and enjoyment of our world’s oceans, waves and beaches through a powerful network. Founded in 1984 by a handful of visionary surfers in Malibu, California, the Surfrider Foundation now maintains over one million supporters, activists and members, with more than 170 volunteer-led chapters and student clubs in the U.S., and more than 500 victories protecting our coasts. Learn more on their official website.