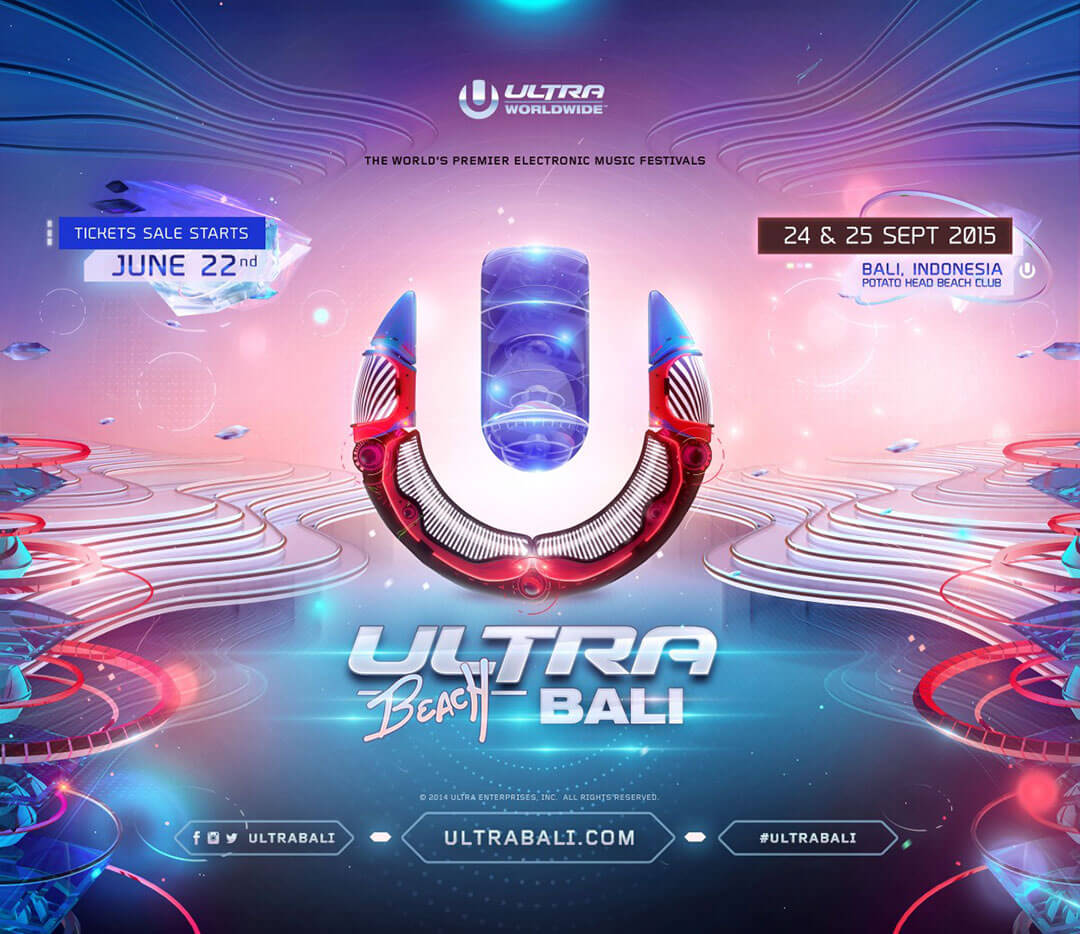 Continuing on its course for global domination, The World’s Most International Festival Brand, ULTRA Worldwide now reveals further details for its debut edition on the Indonesian island of Bali!

Set to grace the shores of ‘The Island of the Gods’ for the first time ever, ULTRA Beach Bali will take place at the heralded Potato Head Beach Club in the beautiful coastal town of Seminyak on Thursday, September 24 and Friday, September 25, 2015.

ULTRA Beach Bali looks set to take the breathtaking island by storm, with 10,000 Ultranauts expected to join the party under the Southern Hemisphere sun over two days & multiple stages later this year. The beautiful venue is situated in the idyllic town of Seminyak, home to sophisticated and chic nightlife spots, luxurious high-end resorts, critically acclaimed restaurants and authentic spa retreats.

Arguably the most sought-after destination on the island, Seminyak offers the perfect blend of traditional Balinese culture and the more modern and luxurious trends and amenities of today. The ULTRA Bali beachfront location will of course be soundtracked by some of dance music’s finest exports, in what will surely be an unforgettable experience for all those involved.

To complete the experience of ULTRA Bali being the ultimate destination festival in Asia, there will also be exclusive ticket and hotel accommodation packages made available over the coming weeks for fans.

Rounding off a mammoth 2015 Asian tour in which ULTRA Worldwide will have reached destinations including Macau, Thailand, South Korea and Japan over the coming months, ULTRA Beach Bali is set to finish the season in true style.

Expect some of the world’s most celebrated names to be added to the lineup in the near future with more details set to be coming very soon.

Tickets for ULTRA Beach Bali (priced below) will go on sale Monday, June 22nd and will be available at ultrabali.com

For more information about tickets, hotel packages and lineups for Ultra Bali, stay tuned to www.ultrabali.com

The ULTRA brand was founded in 1997 by Executive Producer, President & CEO Russell Faibisch, and began producing electronic music events in South Florida, which led to the inaugural Ultra Music Festival in 1999 on the sands of Miami Beach. The internationally renowned festival, which has taken place every March since its inception, celebrated its seventeenth anniversary from March 27-29, 2015 by bringing over 165,000 music enthusiasts to the sold out waterfront event in the heart of the City of Miami. Ultra Music Festival returns to Bayfront Park for its eighteenth annual edition, 18-20 March 2016.

Choosing to follow a unique, creative vision and a wholly organic growth focused around a true love for music, artists, and fans alike, the ULTRA and ULTRA Worldwide brands represent not only the world’s biggest and most successful remaining INDEPENDENT electronic music festival brand, they are now the most international of any festival brand in the world by far. The event organizers continue to transport the unrivalled experience from the Miami flagship festival to an ever-growing number of destinations and fans all over the globe.

Over the past seventeen years, literally thousands of the world’s most iconic DJs, producers and live acts have mesmerized audiences with awe-inspiring sets at ULTRA festivals in ARGENTINA, BRAZIL, CHILE, CROATIA, IBIZA, JAPAN, KOREA, SOUTH AFRICA and of course MIAMI, as well as ROAD TO ULTRA events in CHILE, COLOMBIA, PARAGUAY, SEOUL, TAIWAN, THAILAND and TOKYO, the USA, and now forthcoming events in MACAU and SINGAPORE as well as ULTRA BEACH – BALI. Each and every new global edition is founded on the same successful recipe that has been perfected over seventeen years in Miami, combining the most diverse electronic talent with the most technologically advanced, large-scale festival productions in the world.

In addition, the ULTRA brands pioneered the live stream experience, ‘ULTRA LIVE’ (whereby the festival is brought online to over 20 million unique viewers globally) and the audio broadcasting platform ‘UMF RADIO’ (syndicated to FM Radio in over 42 countries and reaching more than 22million listeners weekly). Also ‘UMF FILMS’ collaboration with FINALKID has seen some of the most visually breathtaking festival aftermovies in the music space, including a feature-length documentary exploring the latest explosion of dance music, entitled CAN U FEEL IT, which premiered at the Ultra Music Festival, Miami 2012 and was exhibited in over 500 theaters across the Unites States.

In 2014, the ULTRA and ULTRA WORLDWIDE brands continued to push the boundaries, bringing an unparalleled combination of cutting edge production and the world’s best electronic acts back to previous strongholds and new frontiers across the globe. With its most recent new Festival editions breaking records in JAPAN in September 2014 and SOUTH AFRICA in February 2015, and with the addition of the many new ROAD TO ULTRA events, the ULTRA brand has united SIXTEEN COUNTRIES across FIVE CONTINENTS worldwide. 2015 will see the global juggernaut that is ULTRA WORLDWIDE roar into ASIA having announced return events in KOREA, THAILAND and JAPAN, and brand new events in MACAU and BALI.