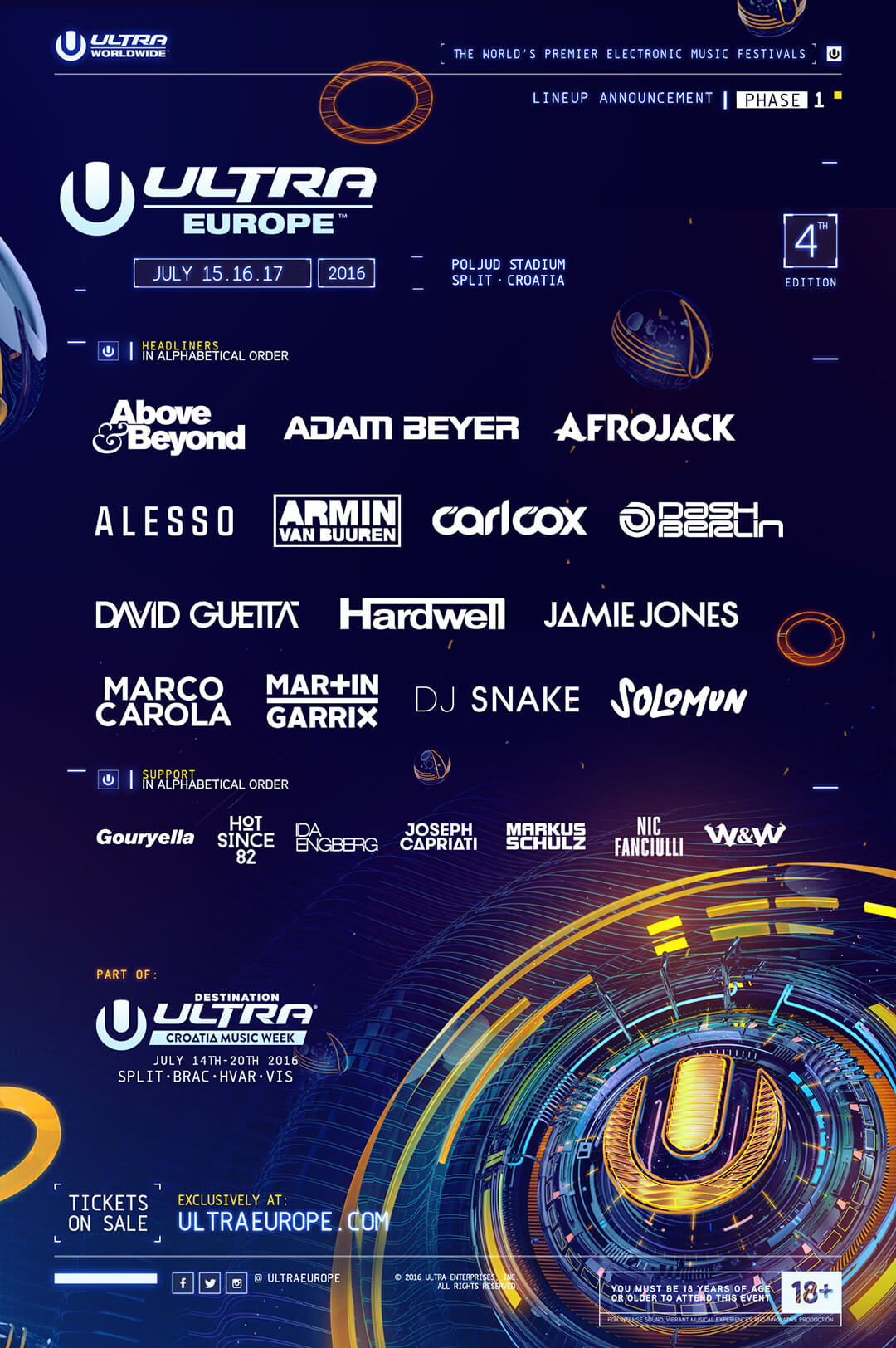 ABOVE & BEYOND, ALESSO, CARL COX, DAVID GUETTA, MARCO CAROLA & MARTIN GARRIX TO HEADLINE AMONGST MANY MORE

In a little over four months time, Europe’s Premier Destination Music Festival – ULTRA Europe – will welcome a dazzling array of DJs and electronic acts to the Dalmatian coast for its fourth annual edition.

BE A PART OF DESTINATION ULTRA – CROATIA MUSIC WEEK!

With Phase Two set to be announced for the main event very soon, and with lineups still to be revealed for the OPENING PARTY at Giraffe Palm Beach Club, Yacht Regatta, ULTRA Beach and RESISTANCE CLOSING PARTY, the second annual edition of Destination ULTRA is shaping up to be even bigger than ever before.

Tickets for Ultra Europe and Ultra Beach Hvar are now available exclusively from UltraEurope.com/tickets. With early bird tickets sold out for the main event in Split already, fans will have to be quick in snapping up the remaining few at €169, after which, the price will rise to €199. To help with the purchases, ULTRA Europe is now offering a payment plan, where fans can split the total cost across four monthly installments. In a new initiative for 2016, group tickets are also on sale, with those who purchase five tickets at once, receiving a sixth for free! All tickets are available to buy exclusively from UltraEurope.com/tickets.

For those looking to travel to any of the Destination ULTRA events, please visit travel2ultra.com for tips, exclusive packages and much more. Travel2Ultra gives festivalgoers the chance to experience Destination ULTRA in true style, with a host of offers and packages for accommodation, transfers, boat parties and Yacht Week parties on sale for some of the most affordable prices. You can also book your spot at the exclusive Beachville campsite through Travel2Ultra, which hosted over 4,000 Ultranauts in 2015 and is set to welcome back even more in 2016.

Further details and ticket information can be found at ultraeurope.com.

Destination ULTRA – Croatia Music Week kicks off on July 14, 2016, with the official Opening Party at the Giraffe Palm Beach House in Split where, in July 2015, ULTRA Europe and techno label Cocoon teamed up to bring Sven Väth and a whole host of his label mates to jumpstart proceedings.

The experience will then move on to ULTRA Europe, the three-day festival at the Poljud Stadium, Split from July 15-17, where over 150,000 revelers are expected to witness electronic music’s most in-demand acts inside one of Croatia’s most majestic venues. Previous headline artists have included the likes of Afrojack, Armin van Buuren, Avicii, Axwell^Ingrosso, Carl Cox, David Guetta, Hardwell, Knife Party, Martin Garrix, Tiësto and Zedd and with the announcement of The Chemical Brothers only last year, there are guaranteed to be a few more surprises in store for 2016. Last year also saw the debut of the RESISITANCE concept at Ultra Europe, where the likes of Apollonia, Guy Gerber, Jamie Jones, Marco Carola, Nic Fanciulli, Sasha, Solomun and many more, offered festivalgoers an alternative on Arcadia Spectacular’s inimitable ‘Afterburner’ stage.

Following on from four mammoth days of partying in Split, and in exclusive partnership with Yacht Week, the Destination ULTRA – Croatia Music Week festivities move onto a one-off Yacht Regatta on July 18, which will see Zlatni Rat Beach on the Island of Brač host one of the most unique parties of the week.

July 19 will then take us to the Island of Hvar for the fourth edition of ULTRA Beach, which will welcome over 5,000 people to the Hotel Amfora Hvar Grand Beach Resort. Headliners in the past have included megastars such as Dillon Francis, Diplo, Fedde Le Grand and Oliver Heldens, and with all three previous editions selling out, ULTRA Beach is yet again expected to be one of the highlights of the week. Finally, on July 20, Destination ULTRA – Croatia Music Week will close the curtain on what is set to be an incredible seven days of partying, with its RESISTANCE Closing Party.

Choosing to follow a unique, creative vision and a wholly organic growth focused around a true love for music, artists and fans alike, the ULTRA and ULTRA Worldwide™ brands represent not only the world’s biggest and most successful remaining INDEPENDENT electronic music festival brand, they are now the most international of any festival brand in the world by far. The event organizers continue to transport the unrivalled experience from the Miami flagship festival to an ever-growing number of destinations and fans all over the globe.