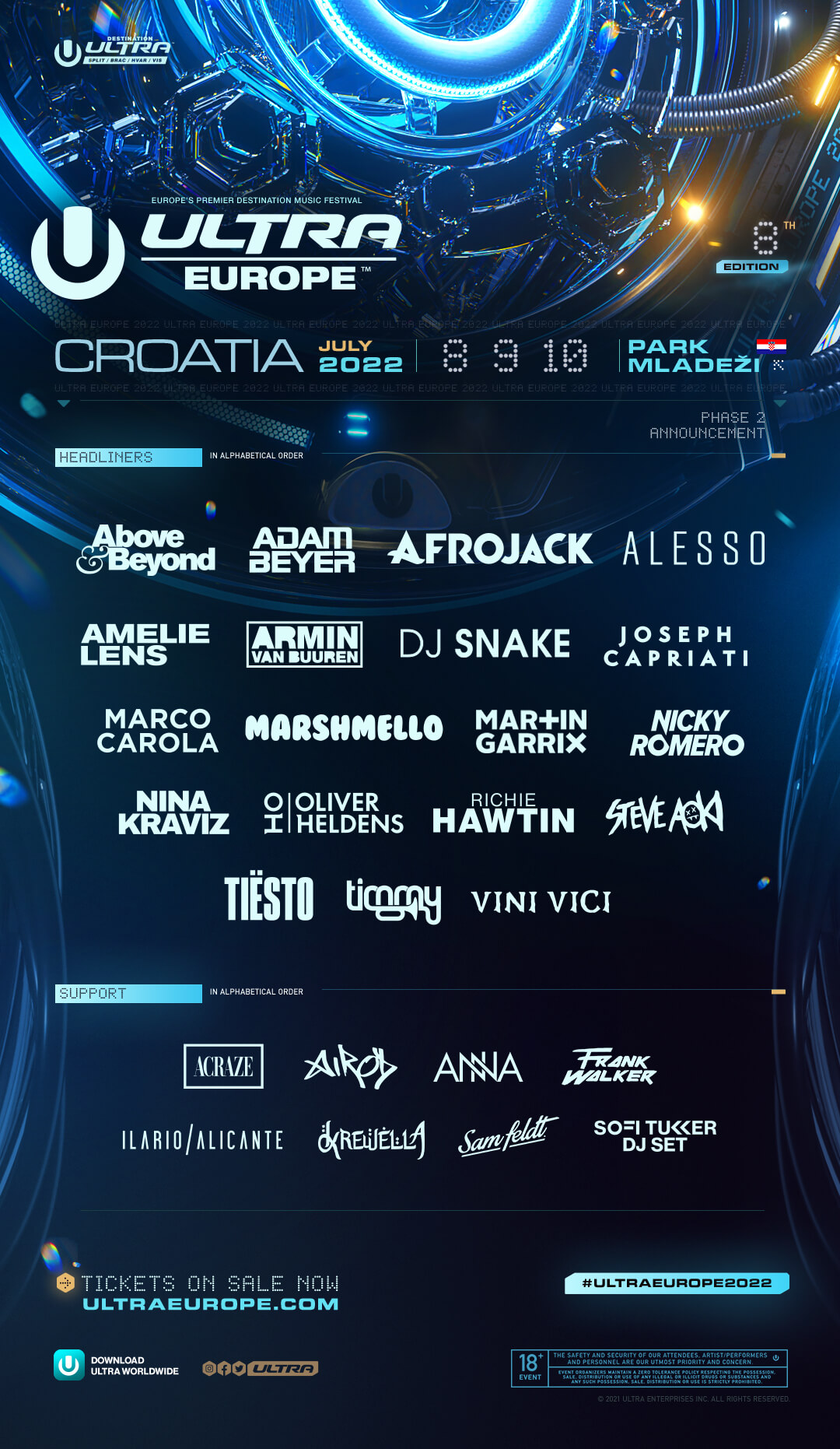 ULTRA Europe has unveiled Phase 2 of its star-studded lineup, featuring some of the biggest international names in electronic music.

Above & Beyond have been at the forefront of electronic dance music for two decades. Songwriters first, producers second, Above & Beyond’s unwavering commitment to their craft has fueled a career that many electronic artists today might only dream of.

DJ Snake is one of the most listened to superstars in electronic music, proudly boasting 3 songs in the Billion Stream Spotify Club. The Grammy-nominated artist and producer turned the world upside down with hits like “Taki Taki” and “Loco Contigo,” and his highly-anticipated return to ULTRA Europe is sure to get the audience jumping.

Marshmello will bring his signature marshmallow-shaped mask, with its broad smile and big eyes, back to ULTRA Europe for the first time since 2018. His songs “Silence”, “Wolves”, “Friends”, “Happier”, and “Alone” have been certified multi-platinum in several countries and appeared in the Top 30 of the Billboard Hot 100.

Steve Aoki has become a fan favorite for ULTRA Europe attendees after multiple headlining performances, and the Grammy-nominated crossover juggernaut will ignite the stage with his famed, larger-than-life cake-throwing theatrics and undulating basslines.

Italian techno authority Marco Carola has remained one of the most in demand DJs on the planet throughout the last two decades, and will return to the RESISTANCE stage after his hard-hitting ULTRA Europe performance in 2019.

TIER 2 GA three-day tickets can be purchased on the official website for €149. ULTRA Europe is also offering the ultimate seven-day Destination ULTRA ticket for €339, which will grant access to all events during the Destination ULTRA week – including an exclusive opportunity for the first 250 purchasers to attend the ULTRA Europe Sunset Family Dinner on Island of Vis before the Closing Party starts. Be sure to get your ULTRA Europe tickets today, and be a part of the world’s premier destination music festival.

Tickets on sale now at https://ultraeurope.com/tickets

A full breakdown of locations, parties and tickets for each event can be found here: https://ultraeurope.com/tickets/